Not all great baseball players have the fan-friendly attitude of Ty Cobb or Ted Williams. There have been players of great skill who could genuinely be described as “nice guys.”   Here is a line-up of such individuals.

Pitcher: Christy Mathewson.  Playing in an era when many players and managers (eg, John McGraw –Mathewson’s manager) smoked, drank, cursed, fought (physically with everyone including umpires) and had a variety of girlfriends, Mathewson stood apart from his contemporaries.  “A Christian Gentleman” was the phrase frequently used to describe the Giants’ pitcher.  He had none of the afore-mentioned “vices”.  Plus, pitching 3 shutouts in a single World Series and winning 373 games in his career also aided to his reputation as a “winner” and  a “nice guy.”

Catcher: Yogi Berra.  You were expecting someone else?  Who said: “When you come to a fork in the road, take it.”  “Always go to other people’s funerals, otherwise they won’t come to yours.”  “So I’m ugly. I never saw anyone hit with his face.” He  won 3 MVPs and his New York Yankees won 10 World Series.

First baseman:  Lou Gehrig. When Babe Ruth hit 60 home runs in a season, Gehrig had 20 more extra base hits and was the AL’s MVP. Eighty years after he left the game, he’s still the finest player ever at his position.

Second Baseman:  Jackie Robinson.  When Branch Rickey required  Robinson to be “nice,” he was Rookie of the Year.  Without restraint, he was the NL’s MVP.  He changed the way the game was played and by whom.

Shortstop:  Honus Wagner.  Still finest SS ever.  1909 World Series.  Pirates v. Tigers.  Wagner v. Cobb.  Cobb, on first base, hollered to Wagner: “I’m coming down.”  Wagner took the catcher’s throw, avoided Cobb’s spikes, and with the ball in his right hand, “tagged” Cobb out on the jaw.  For the Series, Wagner hit .333; Cobb hit .231. The Pirates won the World Series.  Plus, Wagner won 8 batting titles in his career. 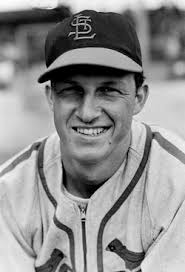 Center Fielder: Willie Mays.  At 16, he played in the Negro Leagues.  At 20,  he was Rookie of Year in NL.  In his next full season, he was MVP.  For his career, he was MVP twice; And finished in top 10 a dozen times.  Had 12 Gold Gloves and hit 660 home runs ( while missing 2 years for military service).  Ted Williams said: “They invented the All-Star game for Willie Mays.” 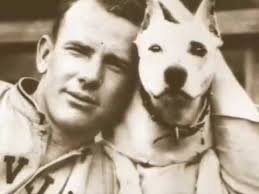 Mascot: Larry.  Cleveland Indians’ mascot in early 20thcentury.  He was a dog.  (see Larry and his BFF, Jack, above)    Toured with the team and participated in team warm-ups.  Traveled with them by car and train.  Tracked down foul balls and straw hats of fans.  Met President Wilson –and chased a squirrel up a tree on White House lawn.  Roommate of Jack Graney.  Every team could use someone like Larry.  “Arf,” Larry said in agreement.

That’s a team of great players who also lacked a downside (eg, drug use, inappropriate behavior). Leo Durocher was wrong when he said: “Nice guys finish last.” But, on his other side, Leo helped Robinson get started in Brooklyn and managed Mays in his early years.

The moral of my story: Great players can also be “nice guys” at the same time.

Two things... First, why have I decided to establish this blog? I like to put essays together. I research an idea or topic looking for information, statistics, stories, quotes, pictures, etc. I enjoy the process and seeing a finished product. I’m told that as I get older, new activities can help maintain energy and keep my brain alert. In other words, I am not doing this for money or fame. Second, regarding the gentleman in the collage of pictures above...it's not me. Those are photos of Christy Mathewson. Why him? When I was young, my primary activity was being sick. It took up much of my time. Eczema (a case so bad I was written up in a medical journal showing doctors what their patients COULD look like), asthma, and allergies. You know allergies: don’t eat this, don’t wear that, and, for Heaven’s sake, don’t touch any of these things (eg, dogs, cats, horses --I only saw horses in cowboy movies and TV shows, dust, swimming pools, my brother --OK, that’s an exaggeration, Rick was a fine brother). In my spare time between doctors' appointments, pills, and ointments, baseball kept me sane. In the 1940s and 1950s, when I grew up, pro footballI and basketball had not yet become extremely popular. Baseball truly was “the national pastime.” I listened to games on the radio (remember it? TV without the picture). I read magazines, books, and newspaper accounts of games. I collected baseball cards. I learned about the game’s history, as well as present. The same with its stars. One man stood out: Christy Mathewson. He was a great pitcher for the New York Giants in the early 20th century. But there was much more to him. At a time when professional athletes made little money (yes, there was such a time) and ball players were considered on the same level as actors, artists, and prostitutes, Mathewson stood out. One of his nicknames was: “The Christian Gentleman.” Most men is baseball drank, smoked, cursed, and fought —with other players, umpires, and fans. The fights were physical, not just verbal. Mathewson did none of these things. But he earned the respect of other players who did them all. Even Ty Cobb and John McGraw. There’s more. He was a college graduate (Bucknell University) when most men were lucky to have a high school diploma. He played other sports, including pro football which you wouldn’t recognize. He was handsome. He played in New York City, then as now, the largest city in the country. Excellence and popularity there meant fame and money. He dressed well. Today, his commercials would rival LeBron’s. And, finally, a hero’s life must have tragedy. After his playing career ended, WWI arrived. He suffered from influenza and was exposed to mustard gas. Chemical warfare. His lungs were damaged and he required treatment for the rest of his life. (Like my Grandfather who also fought in The Great War.) He died in 1925. He was 45 years old. I have his picture here because you need to know more about him than me. He was what an athlete could be. Players like him and their accomplishments got me through a sickly, painful childhood and can still sustain me in difficult times. *****
View all posts by rcarmean →
This entry was posted in Baseball, Dogs, Entertainment, People, Pop Culture, Uncategorized and tagged "Nice Guys", Baseball, Blogging, Brooks Robinson, Christy Mathewson, Competition, Dogs, Entertainment, games, Honus Wagner, humor, Inspiration, Jackie Robinson, Larry: Cleveland Indians' Mascot, Lou Gehrig, Presidents, Roberto Clemente, Sports, Stan Musial, Willie Mays, Yogi Berra. Bookmark the permalink.