Finding What You Need

Today, libraries provide much more than just access to books.  They offer classes in many areas, show films, have authors give presentations, etc.  Recently, I read an article in The New York Times entitled: “12 Authors Write About the Libraries They Love.”  Here, verbatim, are what 2 authors had to say.

First is Neil Gaiman who wrote “American Gods” and the comic book series, “The Sandman.” His article was: “If There’s a Heaven, It’s a Library.”  =

When I was a boy, in the school holidays, from the age of 7, my parents would drop me at the local library on their way to work.  It was a ritual, and it was why I loved the holidays.  The library was a red brick building on the London Road in East Grinstead.

In the beginning, I would head for the children’s library, in the back, open the card index, which listed books by subject, and explore ghosts or magic, time travel, or space. I would find a book I liked, and read everything by the author.  I discovered that the librarians could, through the wonder of the interlibrary loan, get me books they did not have, and that they would.  As far as the librarians were concerned, I was just another customer, and I was treated with a level of respect that I don’t recall getting anywhere else, even at school.

Eventually, I just started reading the children’s library alphabetically, working my way through it author by author.  I cannot imagine being happier than that.  I would walk home when the library closed at 6, and be home in time for dinner. It was a perfect arrangement, one marred only by hunger, so I would take a sandwich in a plastic bag, and grudgingly head outside to the parking lot to scoff it as quickly and efficiently as I could. Eating time was not reading time.

As I entered my teen years I had read the children’s library and so moved into the adult library. Nobody tried to stop me.  I discovered that reading it alphabetically meant that I was encountering a number of very dull books indeed, so I started moving through looking for favorite authors –Brian Aldiss in the A’s, Ursula K. LeGuin in the G’s, R. A. Lafferty in the L’s and so on.  By this time I was walking to the library in the morning, walking home at night when they closed.  It was still my favorite place I the world.  They knocked it down and built a new library when I was 17, and now that library too is gone.

Librarians sometimes discourage me from telling this story.  They point out that libraries should not be seen or used as child-minding services, and that feral children should be discouraged from raising themselves in the shelves and the stacks.  These things are true.

Still, if there is a heaven, one of the many mansions it must contain is a red brick Victorian building, all wood and shelves, waiting for me.  And the shelves will be filled with books by beloved authors, as good as or better than the ones I knew.  I will read my way through the adult library, and then, to attain perfect bliss, I will enter the children’s library, and never need to leave it.  Not even to eat my sandwiches in the parking lot. 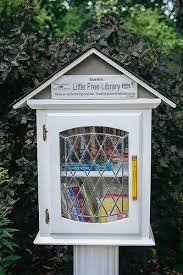 (see above; a “tiny” library) The second author to give an opinion of libraries was Chris Bohjalian, who has written 20 books –3 of which have  been made into movies.  His article was: “A Place to Come Together.” =

Twenty years ago, I lived in Lincoln, Vt., a little village that lost its library.  Lincoln is a hill town of barely a thousand people halfway up Vermont’s fifth highest mountain, and while it gets its hare of leaf peepers in the autumn, it’s a far cry from the picturesque hamlets that have ski resorts to entice tourists the rest of the year.  But it has a general store that bakes mint chocolate brownies worth every calorie –and in 1998, it had a library the size of a living room that those of us who lived there cherished.

That summer, after four weeks of rain, the New Haven River overflowed its banks and flooded the library. Five feet of water poured in, destroying 80 percent of the collection and every single children’s book that wasn’t checked out, because those books were on the lowest shelves.  The next day, as my neighbors piled the waterlogged books to be pulped, some were weeping.

I’ll always recall the sadness of life without a library.  My daughter was 4 years old then, and a big part of our routine was walking there together and picking out books.  I wasn’t alone.  The whole village had PTSD, because a library is one of the only parts of a community that are comfortably multigenerational.  There are children’s story hours and seniors doing yoga and middle school kids working on class projects.  But I also remember how, once the shock of the loss was behind us, we built a new library –with help from people across America.  Readers in 38  states mailed us money.  Others drove to Vermont from as far away as Pennsylvania with their cars packed with books. We didn’t ask for that: Strangers simply felt our pain and wanted to do something.  Within two years, we had a spanking new library.

This summer I was chatting with Deborah Lundbech, the director of the community library in New Haven, Vt.  “one of my greatest joys is connecting a reader with a book,” Lundbech told me. “The other day, we had an 11-year-oldgirl in here who was so excited that we had books five and six in the series she was reading.”

No one will confuse Vermont libraries with the New York Public Library, with its stone lions and 55 million catalog items.  But they matter, even the ones the size of a living room.  It’s not merely that libraries connect us to books.  It’s that they connect us to one another.

When was the last time you visited a library?

Two things... First, why have I decided to establish this blog? I like to put essays together. I research an idea or topic looking for information, statistics, stories, quotes, pictures, etc. I enjoy the process and seeing a finished product. I’m told that as I get older, new activities can help maintain energy and keep my brain alert. In other words, I am not doing this for money or fame. Second, regarding the gentleman in the collage of pictures above...it's not me. Those are photos of Christy Mathewson. Why him? When I was young, my primary activity was being sick. It took up much of my time. Eczema (a case so bad I was written up in a medical journal showing doctors what their patients COULD look like), asthma, and allergies. You know allergies: don’t eat this, don’t wear that, and, for Heaven’s sake, don’t touch any of these things (eg, dogs, cats, horses --I only saw horses in cowboy movies and TV shows, dust, swimming pools, my brother --OK, that’s an exaggeration, Rick was a fine brother). In my spare time between doctors' appointments, pills, and ointments, baseball kept me sane. In the 1940s and 1950s, when I grew up, pro footballI and basketball had not yet become extremely popular. Baseball truly was “the national pastime.” I listened to games on the radio (remember it? TV without the picture). I read magazines, books, and newspaper accounts of games. I collected baseball cards. I learned about the game’s history, as well as present. The same with its stars. One man stood out: Christy Mathewson. He was a great pitcher for the New York Giants in the early 20th century. But there was much more to him. At a time when professional athletes made little money (yes, there was such a time) and ball players were considered on the same level as actors, artists, and prostitutes, Mathewson stood out. One of his nicknames was: “The Christian Gentleman.” Most men is baseball drank, smoked, cursed, and fought —with other players, umpires, and fans. The fights were physical, not just verbal. Mathewson did none of these things. But he earned the respect of other players who did them all. Even Ty Cobb and John McGraw. There’s more. He was a college graduate (Bucknell University) when most men were lucky to have a high school diploma. He played other sports, including pro football which you wouldn’t recognize. He was handsome. He played in New York City, then as now, the largest city in the country. Excellence and popularity there meant fame and money. He dressed well. Today, his commercials would rival LeBron’s. And, finally, a hero’s life must have tragedy. After his playing career ended, WWI arrived. He suffered from influenza and was exposed to mustard gas. Chemical warfare. His lungs were damaged and he required treatment for the rest of his life. (Like my Grandfather who also fought in The Great War.) He died in 1925. He was 45 years old. I have his picture here because you need to know more about him than me. He was what an athlete could be. Players like him and their accomplishments got me through a sickly, painful childhood and can still sustain me in difficult times. *****
View all posts by rcarmean →
This entry was posted in People, Places, Pop Culture, Uncategorized and tagged advice, Blogging, Chris Bohjalian, Inspiration, library, Library of Congress, Neil Gaiman, New York Times, Tiny Libraries, Writing. Bookmark the permalink.