On June 8, 2018, a documentary entitled “Won’t You Be My Neighbor?” will begin showing in theaters. It is the story of Fred Rogers –Mr. Rogers to those who met in their childhood.

A reviewer described the film this way = “Something magical and bittersweet happened during my screening of this documentary about the peerless and fearless Fred Rogers.  About 30 minutes into the film, nearly the entire small theater had broken into audible sobbing and sniffling.  Such is the enduring impact of this cultural force of nature.  It was a reminder of just how talented and uncanny Rogers was at connecting effortlessly with audiences through a screen and, sadly, it was also a collective realization for those gathered in that theater that we hadn’t been spoken to or, as Rogers would say ‘mentioned and managed’, in such a way for quite some time.”

He worked for over 3 decades in children’s television.  He said: “I went into television because I hated it so, and I thought there’s some way using this fabulous instrument to nurture those who would watch and listen.”

In 1963, he began work for CBC (Canadian Broadcasting Corporation).  In 1966, he moved his show (Mr. Rogers Neighborhood) to Pittsburgh and, in time to PBS.  His show began airing there in 1968 and had 895 episodes.  In every episode, he changed into sneakers (they were quieter on set than his work shoes) and a zippered cardigan sweater.  In a typical show, he might have an earnest conversation with his TV audience, interact with live guests, take a field trip to places such as a bakery or music store.  Or he might watch a short film (eg, to show how things are made, like crayons).  Each show had a theme (eg, going to school for the first time).  His presentation of material was very simple and used no animation or fast pace of material. He portrayed himself during the show. He discussed common childhood fears (eg, a child’s fear of being  sucked down a bathtub drain) in songs and skits. 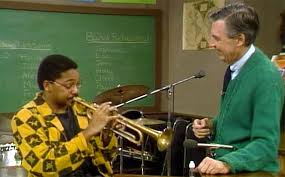 His program won 4 Emmys, plus he was given a Lifetime Achievement Award in 1997.  He wrote many of the songs on his show, as well as 36 books. He received the Presidential Medal of Freedom, 40 honorary degrees, and a Peabody Award.  He is in the Television Hall of Fame.  One of his trademark sweaters is displayed in the Smithsonian Institution as “a Treasure of American History.”  He was ordained a minister in the United Presbyterian Church.  He swam every morning and did not smoke or drink. He became a vegetarian in his 40s because, as he said: “I don’t want to eat anything that has a Mother.”

In 1969, he appeared before the United States Senate Subcommittee on Communications.  He spoke about why he supported funding for public television.  Cuts had been rumored for the service about which he spoke.  He stated that programs like his helped encourage children to become happy and productive citizens, and opposed less positive messages in the media. He recited the lyrics from one of his songs.  The chairman of the subcommittee, John Pastore, was not familiar with Mr. Rogers’ work.  But after the presentation, the Senator said the testimony had given him “goosebumps” and he announced: “I think it’s wonderful.  Looks like you just earned $20 million.”

In 1983, the Supreme Court decided the use of VCRs did not infringe on the copyright of recorded material and it, therefore, could be used for commercial and public TV stations. Mr. Rogers’ testimony was important in the decision.  He said: “I have always felt that the technology that allows people to tape programs like mine and become more active in programming a family’s television life is a good thing.”

In 2003, the asteroid “26858 Misterrogers”  was named after Rogers by the International Astronomical Union.

In 2008, on what would have been Mr. Rogers’ 80thbirthday, his production company sponsored a “Won’t You Wear a Sweater Day.”  His fans were asked to wear their favorite sweater to celebrate the day. The event takes place annually on his date of birth: March 20. 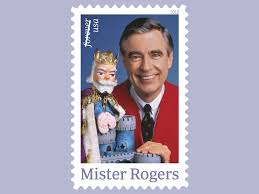 On March 23, 2018, a commemorative US postage stamp was issued which pictured Mr. Roger and one of his show’s characters, King Friday XIII.

“Love, or the lack of it, is the root of everything.”

“Knowing that we can be loved exactly the way we are gives us all the best opportunity for growing into the healthiest of people.”

“I would like to tell you what I often told you when you were much younger.  I like you just the way you are.  And what’s more, I’m so grateful to you for helping the children in your life to know that you’ll do everything you can to keep them safe. And to help them express their feelings in ways that will bring healing in many different neighborhoods.  It’s such a good feeling to know that we’re lifelong friends.” 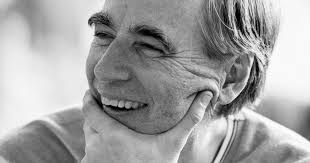 ***Can you match these names to the (above) pictures of Mr. Rogers’ friends?

Two things... First, why have I decided to establish this blog? I like to put essays together. I research an idea or topic looking for information, statistics, stories, quotes, pictures, etc. I enjoy the process and seeing a finished product. I’m told that as I get older, new activities can help maintain energy and keep my brain alert. In other words, I am not doing this for money or fame. Second, regarding the gentleman in the collage of pictures above...it's not me. Those are photos of Christy Mathewson. Why him? When I was young, my primary activity was being sick. It took up much of my time. Eczema (a case so bad I was written up in a medical journal showing doctors what their patients COULD look like), asthma, and allergies. You know allergies: don’t eat this, don’t wear that, and, for Heaven’s sake, don’t touch any of these things (eg, dogs, cats, horses --I only saw horses in cowboy movies and TV shows, dust, swimming pools, my brother --OK, that’s an exaggeration, Rick was a fine brother). In my spare time between doctors' appointments, pills, and ointments, baseball kept me sane. In the 1940s and 1950s, when I grew up, pro footballI and basketball had not yet become extremely popular. Baseball truly was “the national pastime.” I listened to games on the radio (remember it? TV without the picture). I read magazines, books, and newspaper accounts of games. I collected baseball cards. I learned about the game’s history, as well as present. The same with its stars. One man stood out: Christy Mathewson. He was a great pitcher for the New York Giants in the early 20th century. But there was much more to him. At a time when professional athletes made little money (yes, there was such a time) and ball players were considered on the same level as actors, artists, and prostitutes, Mathewson stood out. One of his nicknames was: “The Christian Gentleman.” Most men is baseball drank, smoked, cursed, and fought —with other players, umpires, and fans. The fights were physical, not just verbal. Mathewson did none of these things. But he earned the respect of other players who did them all. Even Ty Cobb and John McGraw. There’s more. He was a college graduate (Bucknell University) when most men were lucky to have a high school diploma. He played other sports, including pro football which you wouldn’t recognize. He was handsome. He played in New York City, then as now, the largest city in the country. Excellence and popularity there meant fame and money. He dressed well. Today, his commercials would rival LeBron’s. And, finally, a hero’s life must have tragedy. After his playing career ended, WWI arrived. He suffered from influenza and was exposed to mustard gas. Chemical warfare. His lungs were damaged and he required treatment for the rest of his life. (Like my Grandfather who also fought in The Great War.) He died in 1925. He was 45 years old. I have his picture here because you need to know more about him than me. He was what an athlete could be. Players like him and their accomplishments got me through a sickly, painful childhood and can still sustain me in difficult times. *****
View all posts by rcarmean →
This entry was posted in Entertainment, People, Places, Pop Culture, Television, Uncategorized and tagged advice, Blogging, children's TV, Entertainment, Family, games, humor, Inspiration, Mr. Rogers, Mr. Rogers' friends, Mr. Rogers' Stamp, music, PBS, Television. Bookmark the permalink.