I was part of a generation who, to outsiders, seemed to protest everything.  The Vietnam War, students’ rights, college curriculums, the Women’s movement, the first Earth Day, and probably some causes I’ve forgotten. Of course, we were always on the right side of history –if I remember correctly.  (And if  I’m wrong, don’t remind me.  I’m getting too old to remember specifics. Besides, if it’s anything illegal, I was probably in Detroit at the time.)

We came up with the phrase: “never trust anyone over 30.”  Imagine how I felt when my 40thbirthday approached.  What a PITA (ie, Pain in the A**).  Could I still trust myself?  How about my wife?  And what would I want for a birthday gift?  Luckily, my wife remembered something I mentioned as we shopped for furniture for our first home.  I still can’t remember what it cost.  But, at first sight, I must have  mumbled: “Yea, but it costs too much.”

As birthdays seem to do annually, the occasion arrived quicker than I expected –but not quicker than my wife’s memory.  Thank goodness.  She gave me a desk.  (see above)  Not a plastic toy one either.  Hunt Country Furniture made it.  It was solid wood, measuring 30” x 60” x 22”. Very  impressive.  Plus, the top and sides of the desk, unlike many doors in our present home, are not hollow. It now has it’s share of scars, scrapes, and wear marks.  Like me, it has aged and shows it.  But it still stands and functions as well as the day I received it.

It provides the surface on which I write.  My computer stands on it.  It’s drawers are packed: pens and pencils, note pads, articles: read and unread, magazines and a few books, plus a three shelf plastic container full and sitting on top.  It does everything but write my articles by itself.  I’m still required to come up with ideas, words, and opinions.  The desk can’t do everything.

t reminds me of other desks which were of greater historical significance.  For example, the desk where Jackie Robinson and Branch Rickey signed a contract and integrated baseball.  (see below)  The agreement was made sixty-some years after professional baseball was established.  Not everyone was ready for the agreement, but Mr. Robinson was.  We are better as a sport and a society because of his optimism, courage, and talent.

The photo of a desk that always brings a smile to my face and tears to my eyes was taken in The White House’s Oval Office.  John Kennedy sat behind it and his son, John John, played underneath it and could be seen through a small doorway cut into the desk’s front.  (see below)  The picture was taken before November 22, 1963. 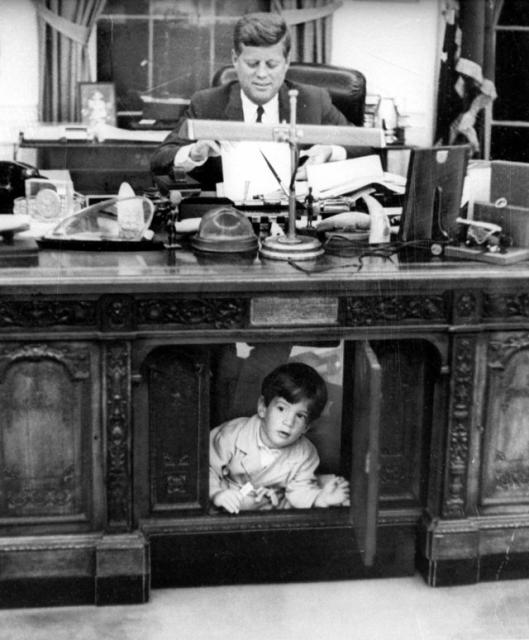 To end on a much lighter note: I remember a picture of Stephen King working at his desk with a dog under foot,  (see below)  perhaps dictating to him.  Or was that a picture of me and Luna?  Eh, No.   It was King and his best friend.  Luna does not give or take dictate. 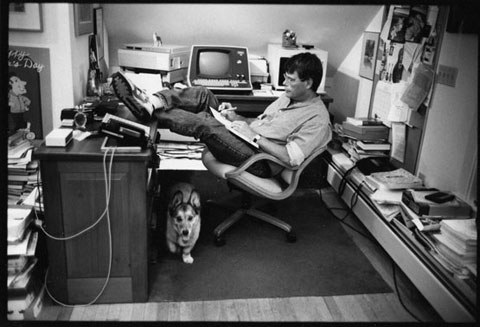 Do you have a desk?  I highly recommend one.

Two things... First, why have I decided to establish this blog? I like to put essays together. I research an idea or topic looking for information, statistics, stories, quotes, pictures, etc. I enjoy the process and seeing a finished product. I’m told that as I get older, new activities can help maintain energy and keep my brain alert. In other words, I am not doing this for money or fame. Second, regarding the gentleman in the collage of pictures above...it's not me. Those are photos of Christy Mathewson. Why him? When I was young, my primary activity was being sick. It took up much of my time. Eczema (a case so bad I was written up in a medical journal showing doctors what their patients COULD look like), asthma, and allergies. You know allergies: don’t eat this, don’t wear that, and, for Heaven’s sake, don’t touch any of these things (eg, dogs, cats, horses --I only saw horses in cowboy movies and TV shows, dust, swimming pools, my brother --OK, that’s an exaggeration, Rick was a fine brother). In my spare time between doctors' appointments, pills, and ointments, baseball kept me sane. In the 1940s and 1950s, when I grew up, pro footballI and basketball had not yet become extremely popular. Baseball truly was “the national pastime.” I listened to games on the radio (remember it? TV without the picture). I read magazines, books, and newspaper accounts of games. I collected baseball cards. I learned about the game’s history, as well as present. The same with its stars. One man stood out: Christy Mathewson. He was a great pitcher for the New York Giants in the early 20th century. But there was much more to him. At a time when professional athletes made little money (yes, there was such a time) and ball players were considered on the same level as actors, artists, and prostitutes, Mathewson stood out. One of his nicknames was: “The Christian Gentleman.” Most men is baseball drank, smoked, cursed, and fought —with other players, umpires, and fans. The fights were physical, not just verbal. Mathewson did none of these things. But he earned the respect of other players who did them all. Even Ty Cobb and John McGraw. There’s more. He was a college graduate (Bucknell University) when most men were lucky to have a high school diploma. He played other sports, including pro football which you wouldn’t recognize. He was handsome. He played in New York City, then as now, the largest city in the country. Excellence and popularity there meant fame and money. He dressed well. Today, his commercials would rival LeBron’s. And, finally, a hero’s life must have tragedy. After his playing career ended, WWI arrived. He suffered from influenza and was exposed to mustard gas. Chemical warfare. His lungs were damaged and he required treatment for the rest of his life. (Like my Grandfather who also fought in The Great War.) He died in 1925. He was 45 years old. I have his picture here because you need to know more about him than me. He was what an athlete could be. Players like him and their accomplishments got me through a sickly, painful childhood and can still sustain me in difficult times. *****
View all posts by rcarmean →
This entry was posted in Baseball, Dogs, Entertainment, People, Pop Culture, Uncategorized and tagged advice, Birthday Gifts, Blogging, Branch Pickey, Desk, Dogs, Inspiration, Jackie Robinson, John John, John Kennedy, Presidents, Sports, Stephen King. Bookmark the permalink.