Check the September 18th issue of Time Magazine for a story of 46 women who were first in other important achievements. To give you a sample of who is included in the article, here are some women that were mentioned whose names you will recognize: Serena Williams (first tennis player to win 23 Grand Slam singles titles in the open era), Barbara Walters (first woman to co-anchor a network evening news program), and Hilary Rodham Clinton (first woman to win a major party’s nomination for President).

Finally, here is a sample of the remaining women who achieved significant firsts in a wide variety of areas. 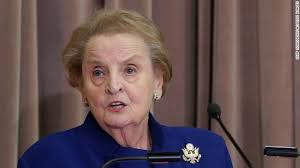 Madeleine Albright (see above): First woman to become U. S. Secretary of State.

Elizabeth Blackburn: First woman to be president of the Salk Institute. 211 individuals have won the Nobel Prize in Medicine. Blackburn is one of 12 women.

Ann Dunwoody: First woman to rise to four-star general in the U. S. military. 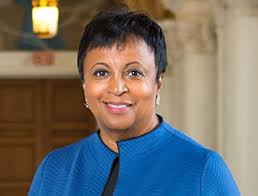 Carla Hayden (see above): First woman and first African American to be the Librarian of Congress. The library has more than books. It contains 164 items including Jackie Robinson’s papers and the contents of Abraham Lincoln’s pockets the night he was assassinated.

Maya Lin: First woman to design a memorial on the National Mall. The Vietnam Veterans Memorial.

Rita Moreno: First Latina to win an Emmy, a Grammy, an Oscar, and a Tony. Only 12 people have done so.

Ilhan Omar: (see above): The first Somali-American Muslim legislator elected to the United States Congress (from Minnesota). “I want to help build a world where chances of birth don’t define peoples lives. I want my daughters to be judged not by their gender or skin color, but by their contributions to our community.”

Kathryn Sullivan: First American woman to walk in space. She also was a member of the shuttle crew that deployed the Hubble Space Telescope.

Alice Waters: First woman to win the James Beard Award for Outstanding Chef. She was a pioneer of the “farm-to-table”, eat what is fresh and locally available movement. She inspired Michelle Obama’s outside the White House food garden.

I have not mentioned all 46 women described in Time magazine. Still, it is worth your time to check out the issue (September 18, 2017) and read about the women saluted therein.

Two things... First, why have I decided to establish this blog? I like to put essays together. I research an idea or topic looking for information, statistics, stories, quotes, pictures, etc. I enjoy the process and seeing a finished product. I’m told that as I get older, new activities can help maintain energy and keep my brain alert. In other words, I am not doing this for money or fame. Second, regarding the gentleman in the collage of pictures above...it's not me. Those are photos of Christy Mathewson. Why him? When I was young, my primary activity was being sick. It took up much of my time. Eczema (a case so bad I was written up in a medical journal showing doctors what their patients COULD look like), asthma, and allergies. You know allergies: don’t eat this, don’t wear that, and, for Heaven’s sake, don’t touch any of these things (eg, dogs, cats, horses --I only saw horses in cowboy movies and TV shows, dust, swimming pools, my brother --OK, that’s an exaggeration, Rick was a fine brother). In my spare time between doctors' appointments, pills, and ointments, baseball kept me sane. In the 1940s and 1950s, when I grew up, pro footballI and basketball had not yet become extremely popular. Baseball truly was “the national pastime.” I listened to games on the radio (remember it? TV without the picture). I read magazines, books, and newspaper accounts of games. I collected baseball cards. I learned about the game’s history, as well as present. The same with its stars. One man stood out: Christy Mathewson. He was a great pitcher for the New York Giants in the early 20th century. But there was much more to him. At a time when professional athletes made little money (yes, there was such a time) and ball players were considered on the same level as actors, artists, and prostitutes, Mathewson stood out. One of his nicknames was: “The Christian Gentleman.” Most men is baseball drank, smoked, cursed, and fought —with other players, umpires, and fans. The fights were physical, not just verbal. Mathewson did none of these things. But he earned the respect of other players who did them all. Even Ty Cobb and John McGraw. There’s more. He was a college graduate (Bucknell University) when most men were lucky to have a high school diploma. He played other sports, including pro football which you wouldn’t recognize. He was handsome. He played in New York City, then as now, the largest city in the country. Excellence and popularity there meant fame and money. He dressed well. Today, his commercials would rival LeBron’s. And, finally, a hero’s life must have tragedy. After his playing career ended, WWI arrived. He suffered from influenza and was exposed to mustard gas. Chemical warfare. His lungs were damaged and he required treatment for the rest of his life. (Like my Grandfather who also fought in The Great War.) He died in 1925. He was 45 years old. I have his picture here because you need to know more about him than me. He was what an athlete could be. Players like him and their accomplishments got me through a sickly, painful childhood and can still sustain me in difficult times. *****
View all posts by rcarmean →
This entry was posted in Entertainment, People, Pop Culture, The Arts, Uncategorized and tagged Alice Waters, Ann Dunwoody, Aretha Franklin, Ava DuVernay, Blogging, Carla Hayden, Cindy Sherman, Eileen Collins, Elizabeth Blackburn, Ilhan Omar, Inspiration, Janet Yellen, Kathryn Sullivan, Loretta Lynch, Madeleine Albright, Maya Lin, Nikki Haley, Rita Moreno, Time magazine, women's accomplishments. Bookmark the permalink.