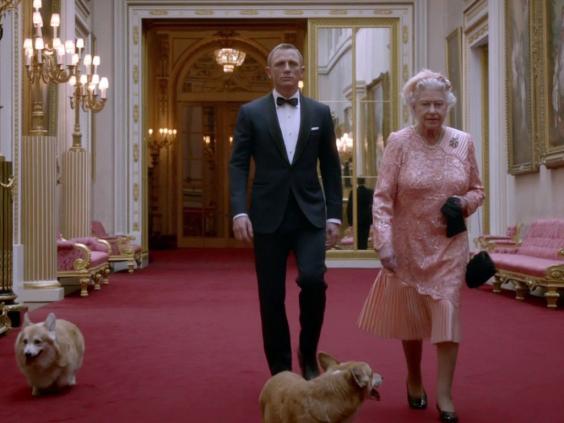 The Queen and 3 Subjects

The article I posted on August 6, 2017, The Great British Baking Show, received a wonderful number of Views, although I assume Beyonce is viewed more often. Plus, it received a record number of Likes (8), although, once again, Beyonce is more liked than I am. (And, according to Wikipedia, her net worth is approximately $349.999 million more than I am, even if I include both my used cars). And, finally, Writing the piece was a great deal of fun.

So, I must ask myself: What was the secret of the article’s popularity? The photograph capturing the marvelous beauty of the shows contestants? Possibly. The humor and good judgment of the hosts and judges? Could be. The tasty pictures of the bakers’ culinary masterpieces? Partially, of course. But the common thread running through all of these reasons is: The show was a production of Great Britain! It’s so obvious, really. Some of the Likers themselves were from “this sceptered isle…this blessed plot, this earth, this realm, this England.” I think those words come from a popular poet. Possibly Wordsworth. (But, I could be incorrect. I have not read Wordsworth since high school.)

But since I am once again putting pen to paper, or, more correctly, fingers to computer, can I turn to that country for inspiration? Of course! Look at the photograph at the top of this piece. (see above) It screams out to me: “Write about The Queen and her Corgis.” That’s a topic that begs to be examined. But it’s no doubt been done, on multiple occasions, by a variety of publications within the Queen’s own country.

How about the Queen’s husband: Prince Philip. No. He’s just retired from public life. Perhaps the Queen’s son? Charles. He was married to Princes Diana. Oops. No; he was the one who rejected her. The cad!! He’s old news. Who’s more up to date? 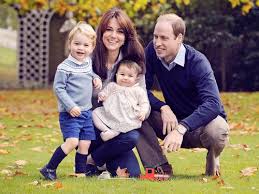 Yes; I’ve got it! The Next Royal family (pictured above) who everyone, even Charles, is waiting for! Look at those faces. So young, so innocent, so lacking in guile. William and Kate. Who could be more photogenic? George and Charlotte? What’s that? Too young, you say. No one is too young to go unreported by the tabloids. Just give them 2 or 3 more years to develop their vocabulary. So, back to William and Kate it is. But wait a moment! I see flaws. William’s hair –or lack of it to be precise. But such an attractive man, educated, polite…but, sadly, deficient in hair. And so we are left with Kate. Magnificent hair, winning smile, always properly dressed… but…my wife says she needs a good meal. What? What about that old cigarette commercial: “You can never be too thin, or too rich.” (Virginia Slims) So close. So very close. But, still, a few hairs or another 2 or 10 pounds too shy.

Is there a symbol or sight that says in CAPITOL letters: England! Perhaps Big Ben? It could be written off as a pocket watch on steroids. The Tower? No; it might be confused with that tower in Paris (ie, Eiffel). Red phone booths? People will think Doctor Who, nothing else. Double decker buses? For those in England, a possible solution. But on this side of the pond, it would be just another symbol for poor public transportation. Stonehenge? Once again poorly educated American citizens would see it as a mere suburb of London in need of a makeover, funded by the public. A definite no go. London’s Eye? I can hear the complaints already: it’s a damn ferris wheel with good PR!

Let’s start over. England is known for its cooking, yes? Yes! What dish says England, Great Britain? Fish and chips? Arthur Treacher’s? Not known in the U. S. any more.  Long John Silver’s? Not known outside the U. S. Tea? It’s the drink for everybody, just behind water in popularity. Tea, plus small sandwiches, scones, small cakes? Ohhhhh. It will get women’s attention. But how many men take afternoon tea? Oh, so close to the goal. The full English breakfast? (pictured below) What’s in it? Eggs, bacon, sausage, grilled tomato, mushrooms, beans, black pudding? What’s black pudding? You’re joking. No, sometimes it has that. Men could go for it, but…? 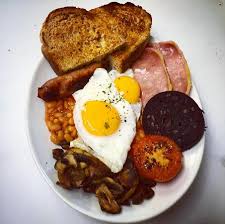 Good grief. There has got to be someone or something that stands for England. Work with me. Monty Python? Winston Churchill? Sherlock Holmes? Mrs. Peel? The Beatles? The Rolling Stones? Shortbread? (pictured below) Shortbread?! Is it made in the U.S.A.? Real shortbread is made in Scotland. That’s not part of Great Britain. Right now, it is. What’s it taste like, what kind of bread? It tastes like a fantastic cookie, lots of butter, sugar, flour –that’s all. Who makes it? Walker’s is the best. How do you know? My wife gets it for me every Christmas., the biggest box she can find. So, that’s it? Yes. Shortbread is it. 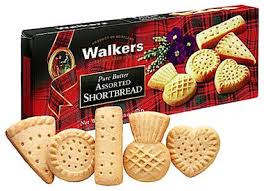 What would you choose to symbolize England?

Two things... First, why have I decided to establish this blog? I like to put essays together. I research an idea or topic looking for information, statistics, stories, quotes, pictures, etc. I enjoy the process and seeing a finished product. I’m told that as I get older, new activities can help maintain energy and keep my brain alert. In other words, I am not doing this for money or fame. Second, regarding the gentleman in the collage of pictures above...it's not me. Those are photos of Christy Mathewson. Why him? When I was young, my primary activity was being sick. It took up much of my time. Eczema (a case so bad I was written up in a medical journal showing doctors what their patients COULD look like), asthma, and allergies. You know allergies: don’t eat this, don’t wear that, and, for Heaven’s sake, don’t touch any of these things (eg, dogs, cats, horses --I only saw horses in cowboy movies and TV shows, dust, swimming pools, my brother --OK, that’s an exaggeration, Rick was a fine brother). In my spare time between doctors' appointments, pills, and ointments, baseball kept me sane. In the 1940s and 1950s, when I grew up, pro footballI and basketball had not yet become extremely popular. Baseball truly was “the national pastime.” I listened to games on the radio (remember it? TV without the picture). I read magazines, books, and newspaper accounts of games. I collected baseball cards. I learned about the game’s history, as well as present. The same with its stars. One man stood out: Christy Mathewson. He was a great pitcher for the New York Giants in the early 20th century. But there was much more to him. At a time when professional athletes made little money (yes, there was such a time) and ball players were considered on the same level as actors, artists, and prostitutes, Mathewson stood out. One of his nicknames was: “The Christian Gentleman.” Most men is baseball drank, smoked, cursed, and fought —with other players, umpires, and fans. The fights were physical, not just verbal. Mathewson did none of these things. But he earned the respect of other players who did them all. Even Ty Cobb and John McGraw. There’s more. He was a college graduate (Bucknell University) when most men were lucky to have a high school diploma. He played other sports, including pro football which you wouldn’t recognize. He was handsome. He played in New York City, then as now, the largest city in the country. Excellence and popularity there meant fame and money. He dressed well. Today, his commercials would rival LeBron’s. And, finally, a hero’s life must have tragedy. After his playing career ended, WWI arrived. He suffered from influenza and was exposed to mustard gas. Chemical warfare. His lungs were damaged and he required treatment for the rest of his life. (Like my Grandfather who also fought in The Great War.) He died in 1925. He was 45 years old. I have his picture here because you need to know more about him than me. He was what an athlete could be. Players like him and their accomplishments got me through a sickly, painful childhood and can still sustain me in difficult times. *****
View all posts by rcarmean →
This entry was posted in Dogs, People, Pop Culture, Uncategorized and tagged Afternoon Tea, Corgis, Fish and Chips, Full English Breakfast, Great Britain, London's Eye, Shortbread, Stonehenge, tea, The Royal Family, The Tower. Bookmark the permalink.