From Zaharias to Ledecky

In my lifetime, the idea of women participating in ( often professional) sports as an individual or team took off. In my opinion, the first woman to demonstrate such a direction could be taken was Mildred “Babe” Didrikson Zaharias. She was born in 1911 and excelled in a variety of sports: track and field, basketball, and golf. At the 1932 Summer Olympics, she was entered in 3 events = the 80 meter hurdles (winning in a world record time), the javelin (won with an Olympic record throw), and the high jump (she won the Silver medal, not tying for a Gold because it was ruled her technique was incorrect).

In the 1940s and 1950s, she was the finest woman golf player and personality. She won 48 tournaments, including 10 majors. She won 17 consecutive tournaments, a record for either sex. A writer for the New York Times said of her: “Except for Arnold Palmer, no golfer has ever been more beloved by the gallery.” In 1950, she was one of 13 women who created the LPGA. She was the fastest player to achieve 10, 20, and 30 wins. While playing, she served as the LPGA president from 1952 to 1955. In 1953, she was operated on for colon cancer. In her comeback of 1954, she won the Vare trophy for lowest scoring average. One month after surgery, while wearing a colostomy bag, she won her 10th major. Cancer returned and she died in 1956. In 1977, she was one of the 6 original inductees into the LPGA Hall of Fame. 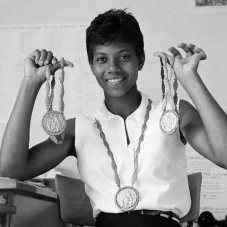 Some of the most talented “Descendents” of these women include the following: Laila Ali: The daughter of Muhammad Ali was a professional boxer from 1999 to 2007. Her record: 24 fights, 24 wins with 21 by KO/TKO. A clear example of the apple not falling far from the tree. Bonnie Blair: As a speed skater in 3 Winter Olympics (1988, 1992, 1994), she won 5 Gold and 1 Bronze medals. In 1992, she won the James E. Sullivan Award (top amateur in the USA) and the Sports Illustrated Sportsman of the Year. Mia Hamm: Playing for the US Women’s National Soccer Team, she was an inspiration for American soccer and millions of young women. She scored 158 goals, while her team won 2 Olympic Gold medals and 2 World cups.

Jackie Joyner-Kersee: (pictured above) I, along with Sports Illustrated, believe she is the greatest female athlete of the 20th Century. She was in 4 Olympics, competing in the Heptathlon and Long Jump and earning 2 Gold and 1Bronze Medals in the 7-event competition, plus a Gold and 2 Bronze in the Long Jump. In the 1988 Olympics, she got Gold in both events, but I thought another statistic was even more impressive. She was measured as having 4% body fat. Seeing her in a “small” track suit, I thought the fat could be only in 1 place: her ear lobes. Everything else was muscle. Katie Ledecky: She is the latest American Olympic star in swimming. At age 20, she holds the freestyle record in 6 distances. She was the most decorated female athlete at the 2016 Olympic games: 4 Gold and 1 Silver medal, plus 2 world records. She was the youngest person on Time magazine’s 100 most influential people. 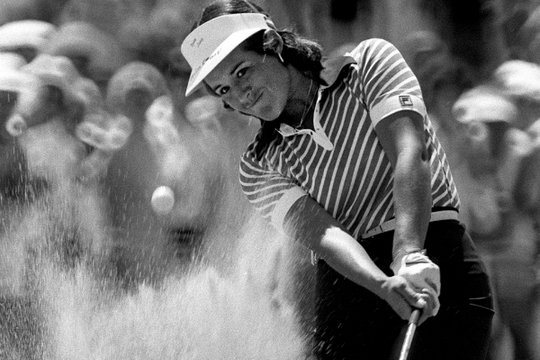 Lorena Ochoa: (pictured above) She played on the LPGA tour from 2003 to 2010. She won 30 tournaments. She was the top-ranked female golfer in the world for 158 consecutive weeks, from April 23, 2007 until she retired on May 2, 2010. She was the first Mexican golfer of either sex to be ranked number one in the world. She will enter the World Golf Hall of Fame in September, 2017. Annika Sorenstam: She won 72 times on the LPGA tour including 10 Majors. She was Rookie of the Year, and Player of the Year 8 times. She shot a 59 and had 29 consecutive rounds under par. She won over $20 million and entered the World Golf Hall of Fame in 2003. In Women’s Golf, she is the G.O.A.T.: the Greatest of All Time.

Diana Taurasi: (pictured above) She played for Connecticut; they won 3 championships. Their record: 139 – 8. She was on 4 Gold Medal Olympic teams. She has been on 3 WNBA champions. Throughout her career, she scored. A few days ago, she broke the WNBA record for scoring and 3-point shots made. She was the Rookie of the Year, an MVP twice, and won 5 scoring titles. Dara Torres: My favorite Olympian. She was the first American swimmer to go to 5 Olympics. She earned at least one medal in each. She is one of 3 women with a total of 12 Olympic medals: 4 each of Gold, Silver, and Bronze. She won a medal at age 41; no one else has. Wow. Lindsey Vonn: She has won 2 Olympic medals for the USA. But that’s only the beginning of her success. In 15 seasons of World Cup skiing, she has 77 wins, some in all 5 disciplines. Four times she has won the World Cup overall championship. She is the most successful American skier in history. Serena Williams: She has won 39 Grand Slam titles (23 in singles, 14 in doubles, 2 in mixed doubles; her winning percentage is 86+% in all 3). Plus 4 Olympic Gold medals. When asked: Are you the greatest woman tennis player of all time? Her reply: “I’m one of the greatest athletes of all-time.” OK.

I have mentioned a baker’s dozen (13) of women athletes. All have had exceptional careers. Who would you add to the list?

Two things... First, why have I decided to establish this blog? I like to put essays together. I research an idea or topic looking for information, statistics, stories, quotes, pictures, etc. I enjoy the process and seeing a finished product. I’m told that as I get older, new activities can help maintain energy and keep my brain alert. In other words, I am not doing this for money or fame. Second, regarding the gentleman in the collage of pictures above...it's not me. Those are photos of Christy Mathewson. Why him? When I was young, my primary activity was being sick. It took up much of my time. Eczema (a case so bad I was written up in a medical journal showing doctors what their patients COULD look like), asthma, and allergies. You know allergies: don’t eat this, don’t wear that, and, for Heaven’s sake, don’t touch any of these things (eg, dogs, cats, horses --I only saw horses in cowboy movies and TV shows, dust, swimming pools, my brother --OK, that’s an exaggeration, Rick was a fine brother). In my spare time between doctors' appointments, pills, and ointments, baseball kept me sane. In the 1940s and 1950s, when I grew up, pro footballI and basketball had not yet become extremely popular. Baseball truly was “the national pastime.” I listened to games on the radio (remember it? TV without the picture). I read magazines, books, and newspaper accounts of games. I collected baseball cards. I learned about the game’s history, as well as present. The same with its stars. One man stood out: Christy Mathewson. He was a great pitcher for the New York Giants in the early 20th century. But there was much more to him. At a time when professional athletes made little money (yes, there was such a time) and ball players were considered on the same level as actors, artists, and prostitutes, Mathewson stood out. One of his nicknames was: “The Christian Gentleman.” Most men is baseball drank, smoked, cursed, and fought —with other players, umpires, and fans. The fights were physical, not just verbal. Mathewson did none of these things. But he earned the respect of other players who did them all. Even Ty Cobb and John McGraw. There’s more. He was a college graduate (Bucknell University) when most men were lucky to have a high school diploma. He played other sports, including pro football which you wouldn’t recognize. He was handsome. He played in New York City, then as now, the largest city in the country. Excellence and popularity there meant fame and money. He dressed well. Today, his commercials would rival LeBron’s. And, finally, a hero’s life must have tragedy. After his playing career ended, WWI arrived. He suffered from influenza and was exposed to mustard gas. Chemical warfare. His lungs were damaged and he required treatment for the rest of his life. (Like my Grandfather who also fought in The Great War.) He died in 1925. He was 45 years old. I have his picture here because you need to know more about him than me. He was what an athlete could be. Players like him and their accomplishments got me through a sickly, painful childhood and can still sustain me in difficult times. *****
View all posts by rcarmean →
This entry was posted in Entertainment, People, Pop Culture, Uncategorized and tagged basketball, boxing, golf, skiing, soccer, speed skating, swimming, tennis, track and field, women's sports. Bookmark the permalink.