Think of a famous photographer. Who is it? Ansel Adams? Robert Capa? Henri Cartier-Bresson? Gordon Parks? Someone else famous who leaps to mind (eg, Eisenstaedt, Steichen, Stieglitz, Weston)? What do they have in common? They are all men. Now, name a woman just as talented. Someone in addition to Annie Leibovitz who is famous for photographing famous people.

A bit more difficult? Here’s a name to remember: Dorothea Lange. (see her picture above) Her first success was a portrait studio in Berkeley, California in 1919. When America’s Great Depression was destroying the country and the people in it, she worked for the Federal Resettlement Administration and the Farm Security Administration.

From 1935 to 1939, her pictures “brought the plight of the poor and forgotten to public attention.” Her most famous photo was “Migrant Mother.”  (See photo at right)  The woman’s name was Florence Owens Thompson, age 32, Mother of 7, living in the family car and a tent. A San Francisco newspaper published a story based on Lange’s travels and included some of her pictures. Government aid was sent to areas she had documented.

In 1941, after the attack on Pearl Harbor, Japanese Americans were forcefully “relocated” to internment camps in the western United States. Ms. Lange photographed people’s removal. They lost their homes, farms, jobs. The United States Army “impounded” her pictures and they were not seen for 50 years. The living conditions of these people were not like Bergen-Belsen or Auschwitz. No gas chambers, no firing squads, no mass burials. But the living conditions might best be described as “spartan.” And there were fences and guard towers. No one went “home” until the war was over. 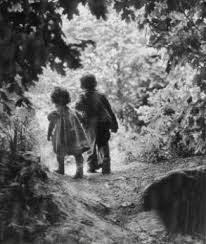 In 1953, Ms. Lange helped her friend, Edward Steichen, recruit photographers for a project (“The Family of Man”) whose photographs would tour the world and, eventually, become a book. You have probably seen it. Ms. Lange sent a recruiting letter: “A Summons to Photographers All Over the World” asking them to “show Man to Man across the world. Here we hope to reveal by visual images Man’s dreams and aspirations, his strength, his despair under evil. If photography can bring these things to life, this exhibition will be created in a spirited, passionate, and devoted faith in Man.” The exhibition was seen by 9 million people world wide. A book containing many of the pictures has been seen by many more.

On August 29, 2014, PBS broadcast: “American Masters –Dorothea Lange: Grab a Hunk of Lightning.” It tells the story of Lange’s life and career. A book of the same name was published in 2013. Ms. Lange died in 1965 at age 70. Many of her pictures are online.

Two things... First, why have I decided to establish this blog? I like to put essays together. I research an idea or topic looking for information, statistics, stories, quotes, pictures, etc. I enjoy the process and seeing a finished product. I’m told that as I get older, new activities can help maintain energy and keep my brain alert. In other words, I am not doing this for money or fame. Second, regarding the gentleman in the collage of pictures above...it's not me. Those are photos of Christy Mathewson. Why him? When I was young, my primary activity was being sick. It took up much of my time. Eczema (a case so bad I was written up in a medical journal showing doctors what their patients COULD look like), asthma, and allergies. You know allergies: don’t eat this, don’t wear that, and, for Heaven’s sake, don’t touch any of these things (eg, dogs, cats, horses --I only saw horses in cowboy movies and TV shows, dust, swimming pools, my brother --OK, that’s an exaggeration, Rick was a fine brother). In my spare time between doctors' appointments, pills, and ointments, baseball kept me sane. In the 1940s and 1950s, when I grew up, pro footballI and basketball had not yet become extremely popular. Baseball truly was “the national pastime.” I listened to games on the radio (remember it? TV without the picture). I read magazines, books, and newspaper accounts of games. I collected baseball cards. I learned about the game’s history, as well as present. The same with its stars. One man stood out: Christy Mathewson. He was a great pitcher for the New York Giants in the early 20th century. But there was much more to him. At a time when professional athletes made little money (yes, there was such a time) and ball players were considered on the same level as actors, artists, and prostitutes, Mathewson stood out. One of his nicknames was: “The Christian Gentleman.” Most men is baseball drank, smoked, cursed, and fought —with other players, umpires, and fans. The fights were physical, not just verbal. Mathewson did none of these things. But he earned the respect of other players who did them all. Even Ty Cobb and John McGraw. There’s more. He was a college graduate (Bucknell University) when most men were lucky to have a high school diploma. He played other sports, including pro football which you wouldn’t recognize. He was handsome. He played in New York City, then as now, the largest city in the country. Excellence and popularity there meant fame and money. He dressed well. Today, his commercials would rival LeBron’s. And, finally, a hero’s life must have tragedy. After his playing career ended, WWI arrived. He suffered from influenza and was exposed to mustard gas. Chemical warfare. His lungs were damaged and he required treatment for the rest of his life. (Like my Grandfather who also fought in The Great War.) He died in 1925. He was 45 years old. I have his picture here because you need to know more about him than me. He was what an athlete could be. Players like him and their accomplishments got me through a sickly, painful childhood and can still sustain me in difficult times. *****
View all posts by rcarmean →
This entry was posted in People, The Arts, Uncategorized and tagged Art, Dorothea Lange, History, Internment Camps, photography, The Family of Man, The Great Depression. Bookmark the permalink.