This is less an article than it is an announcement. The Presidential Medal of Freedom is the highest honor a President can bestow upon a citizen for making a significant contribution to our society. I think you might enjoy knowing what people have done to receive the honor.

Occasionally, someone may believe the award is given only to athletes and film stars. Not true. In 2015, medals were presented to: Willie Mays (baseball), Yogi Berra (“philosopher”), Steven Spielberg (film), but also Bonnie Carroll (A private citizen who founded TAPS –Tragedy Assistance Program for Survivors. A program which provides support to people affected by the death of a member of the military.) and Katherine G. Johnson (A NASA mathematician who worked on space programs from Mercury to the Shuttle efforts.)

My attempts at humor within this article are not meant to be disrespectful, but merely to say something about individuals for whom you may already know a great deal. The President’s remarks about recipients, available on the internet, are funnier than mine. No doubt he has better writers. For example, when introducing Bruce Springsteen, Mr. Obama said: “I am the President and he is The Boss.” The President referred to Michael Jordan as “the guy from ‘Space Jam.’”

Here is the list of people who, on 11/22/16, received The Presidential Medal of Freedom. 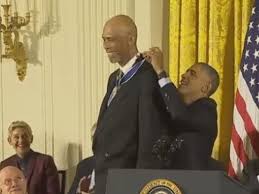 Kareem Abdul-Jabbar. He is the NBA’s all-time leading scorer and winner of 9 championships (6 as a pro and 3 in college). At present, at 7’2” tall, he is the tallest writer and social commentator on the planet.

Elouise Cobell. A Native American who won a 15 year legal battle with the Federal Government for its mismanagement of Indian Trust Funds since the late 1800s. Over 300,000 members of Indian nations benefited from her efforts. 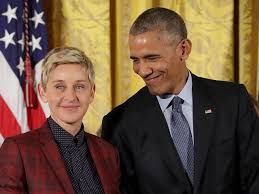 Ellen DeGeneres. She has gone from stand-up comic to television star to social outcast because of her sexual preference to talk show host rivaling Oprah in popularity. Throughout her journey, she has been funny, compassionate, and generous.

Robert DeNiro. Early in his film career, he asked movie goers: “You talkin’ to me?” and we have followed him ever since, even when he was a “Raging Bull.”

Richard Garwin. A physicist who: designed the first hydrogen bomb (at age 24), helped develop spy satellites, and helped with research that produced the MRI.

Bill and Melinda Gates. A couple who has given away a record amount of money to charitable causes, while maintaining enough funds to live comfortably. They wish to thank everyone who has bought Windows –whatever version.

Frank Gehry. An architect responsible for creating: the Walt Disney concert hall (in LA), the California Aerospace Museum of Science, and the Guggenheim Museum in Bilbao Spain, among other famous buildings.

Margaret H. Hamilton. A computer scientist who developed the on-board flight software for the Apollo space program. Her programming enabled Apollo 11 to successfully land on the moon in spite of a system ”overload” which said an abort might be necessary –but wasn’t.

Tom Hanks (AKA David S. Pumpkins). An Oscar-winning actor and producer, a spokesman for veterans, and the best liked man in the world.

Maya Lin. “A class project” of hers was selected as the design for the Vietnam Veterans Memorial in Washington, D. C. which brought recognition and respect to those who gave their lives in an unpopular war and provided a sacred place for a grateful nation to grieve for their loss.

Lorne Michaels. He and Saturday Night Live have been with us for 40 years. This program and others made him the creator of night time TV laughter.

Newton Minow. At age 34, President Kennedy appointed him FCC chairman. He described TV thus: “When television is good, nothing –theater, magazines, newspapers—is better. But when television is bad, nothing is worse.” He called television of the 1960s as “a vast wasteland.” His opinion was accepted and led to the Public Television System. He was named Chairman of PBS.

Eduardo Padron. President of Miami Dade College for 4 decades. He has worked to give all students quality, affordable education, and advocated innovative teaching.

Robert Redford. He entertained movie audiences as The Sundance Kid, Bob Woodward, and Johnny Hooker. And he cared for the environment and young film makers, as well.

Diana Ross. In a 50 year career, solo and with the Supremes, she was Motown’s finest contributor to popular music –along with a few other artists (eg, Smokey Robinson, Stevie Wonder, Marvin Gaye, Michael Jackson, Lionel Richie, etc!!).

Vin Scully. He was the Dodgers’ broadcaster and “the Voice of Summer” for fans. Generations loved his passion for baseball and his description of its history for 67 years, from Jackie Robinson to Clayton Kershaw.

Cicely Tyson. An exceptional actress on film, television, and Broadway for 60 years. In acting, she is a Mount Rushmore of one.

For more information on these individuals: www.whitehouse.gov

Two things... First, why have I decided to establish this blog? I like to put essays together. I research an idea or topic looking for information, statistics, stories, quotes, pictures, etc. I enjoy the process and seeing a finished product. I’m told that as I get older, new activities can help maintain energy and keep my brain alert. In other words, I am not doing this for money or fame. Second, regarding the gentleman in the collage of pictures above...it's not me. Those are photos of Christy Mathewson. Why him? When I was young, my primary activity was being sick. It took up much of my time. Eczema (a case so bad I was written up in a medical journal showing doctors what their patients COULD look like), asthma, and allergies. You know allergies: don’t eat this, don’t wear that, and, for Heaven’s sake, don’t touch any of these things (eg, dogs, cats, horses --I only saw horses in cowboy movies and TV shows, dust, swimming pools, my brother --OK, that’s an exaggeration, Rick was a fine brother). In my spare time between doctors' appointments, pills, and ointments, baseball kept me sane. In the 1940s and 1950s, when I grew up, pro footballI and basketball had not yet become extremely popular. Baseball truly was “the national pastime.” I listened to games on the radio (remember it? TV without the picture). I read magazines, books, and newspaper accounts of games. I collected baseball cards. I learned about the game’s history, as well as present. The same with its stars. One man stood out: Christy Mathewson. He was a great pitcher for the New York Giants in the early 20th century. But there was much more to him. At a time when professional athletes made little money (yes, there was such a time) and ball players were considered on the same level as actors, artists, and prostitutes, Mathewson stood out. One of his nicknames was: “The Christian Gentleman.” Most men is baseball drank, smoked, cursed, and fought —with other players, umpires, and fans. The fights were physical, not just verbal. Mathewson did none of these things. But he earned the respect of other players who did them all. Even Ty Cobb and John McGraw. There’s more. He was a college graduate (Bucknell University) when most men were lucky to have a high school diploma. He played other sports, including pro football which you wouldn’t recognize. He was handsome. He played in New York City, then as now, the largest city in the country. Excellence and popularity there meant fame and money. He dressed well. Today, his commercials would rival LeBron’s. And, finally, a hero’s life must have tragedy. After his playing career ended, WWI arrived. He suffered from influenza and was exposed to mustard gas. Chemical warfare. His lungs were damaged and he required treatment for the rest of his life. (Like my Grandfather who also fought in The Great War.) He died in 1925. He was 45 years old. I have his picture here because you need to know more about him than me. He was what an athlete could be. Players like him and their accomplishments got me through a sickly, painful childhood and can still sustain me in difficult times. *****
View all posts by rcarmean →
This entry was posted in Entertainment, Movies, People, Pop Culture, Television, The Arts, Uncategorized and tagged Medal of Freedom Actors, Medal of Freedom Athletes, Microsoft, Motown, Native American Awards, President Obama, Presidential Medal of Freedom, Vietnam Memorial. Bookmark the permalink.